We know so little about our neighbouring countries was realised by me during my six days visit to Sri Lanka in the second week of December 2018. I was the part of the 23-member delegation of the Indian Federation of Working Journalists, which travelled to many places in Sri Lanka. While Indians have known it as Sri Lanka from time immemorial, it was called Ceylon when it was a British Colony and its original name was restored in 1972, after 24 years of her gaining independence in 1948. Sri Lanka is credited to have the first woman Prime Minister Sirimavo Bandaranaike in the entire world, way back in 1960. Most of us started our journey by Air India on 10th of December in the afternoon from Terminal 3 of the Indira Gandhi international airport of New Delhi reached within three and half hours at Colombo’s Bandaranaike international airport. Colombo is one of the modern cities of the world with the all-natural gorgeousness of ocean, lagoons, gardens and greeneries. Manmade high-rise buildings, modern airport, potholes free roads, all round cleanliness and abounding of comfortable hotels etc, make this city all the more attractive. Hospitality in Sri Lanka is, to say the least, par excellence.

For any Indian visitor to Sri Lanka, what conjure up are the places associated with Ramayana. So, on reaching Colombo when we were told that this time the delegation would not be taken to the places of Ramayan trail, some of the journalists were disappointed a bit, but later after seeing other places, they felt happy that there visit proved to be more educative than what they had actually thought of. We were received at the airport by the office bearers of ‘Sri Lanka Press Association’ (SLPA). Its energetic and young Foreign Secretary Kurulu K. Kariyakarawana and his Indian wife, Gitika Talukdar, who herself is an accomplished journalist accompanied us from the beginning of our journey to the last day. This duo took all pains to ensure our comfortable stay and elaborate arrangements for our reception at various places. All Indian journalists felt very happy when they were told that this time they would have the opportunity to see the post-conflict areas of North-East Sri Lanka, particularly from Batticaloa and Trincomalee. Sri Lanka Press Association was given generous assistance by the Ministry of Tourism of Sri Lanka to take care of visiting Indian journalists

The climate of Sri Lanka remains hot and humid throughout the year mainly because it is situated near the equator and surrounded by the ocean from all side. The total area of Sri Lanka is nearly 67,000 square kilometres and the population is slightly more than two crores. It is a multi-religious and cultural society More than 75 percent population consists of Buddhists and Hindus are the second largest religion. Quite a large number of Muslims and Christian also inhabit the island. During the last two decades, the Muslim population has become assertive because economically they have become more prosperous mainly due to huge remittances from the Gulf countries. In all these years grand mosques have sprung up particularly in the North-Eastern part of Sri Lanka. Three language formula- Singhalese, English and Tamil- is observed Sri mainly in all Government programmes. Tamil has been given more importance possibly to assuage the feelings of the Tamilian population, who were on the war path for very long period hampering the development of Sri Lanka. Singhalese, by all means, is the dominant language of the country but in the North-eastern part of Sri Lanka, Tamil is widely spoken and understood, where Tamil population is mainly concentrated. Tamilians are settled in considerable numbers in other parts of the country as well. Sinhala is a very sweet language and like any other Indian language, it is replete with Sanskrit words.

It was a delightful experience for all of us to see the love of Sri Lankans for National Song. While there is a controversy raging in India whether at the time of the singing of the National Song one should stand up in its honour or not, in Sri Lanka people pay their obeisance to their national song by standing in attention. Let me narrate an incident. While some of us, including a few Sri Lankans, were chatting, gossiping, watching television and reading newspapers in the lobby of the Sri Lanka Foundation, where we were put up for the first two days as we were waiting for others to board the bus, which was to take us to some other places but in the meantime the National Song of Sri Lanka begun playing. And to wonder to our wonders, everybody including sweepers, who were mopping the floors, receptionist and others stood up in attention and till the end of the playing of the song. Those who were entering the premises of the Sri Lanka Foundation, even they also stood like a statue and waited till the song was finished. In deference to the National Song of Sri Lanka, we also joined them and stood up at the places, where we were. When we inquired about it we were told that it has now become a habit of every Sri Lankan to stand up in the place as where he or she is at the time of the playing of the national song. This good habit is inculcated among Sri Lankans right from their school days or childhood. The pleasant surprise is that Sri Lanka, which is a multi-religious country, does not face any resistance from any quarters on this issue. Muslims and Christians, who oppose the standing at the time of playing the national song, do not make even a murmur of opposition in Sri Lanka. I wish the same spirit of respect for the National Song was found in India. It looks as if the politicians and bigots have largely been responsible for creating a rift in different religions in India. A feeling has been created in our country that standing up at the time of playing of the National Song is against one religion or community.

Another significant contrast which could be noticed between India and Sri Lanka is that in public functions everybody sits as an audience. Only those persons go up to the podium or stage whose names are called out by the moderator. He or she is supposed to immediately come down from the stage and then sit among the audience as before. In India, on the contrary, we find that there is always a pell-mell for grabbing a seat on the stage. Those who do not get the seat on the stage they feel frustrated and show their unconcealed indignation. It may sound strange but it is a fact that even the President of the country and the Ministers, Army Generals and top bureaucrats they all sit in the audience and move to the stage when their names are called out.

To my utter surprise, I found that number of people speaking/understanding Hindi has gone up many times during the last two-three decades. Indian High Commission in Sri Lanka is also doing its own bit for the promotion of Hindi in Sri Lanka. However, to our surprise, we found that many Sri Lankans have picked up Hindi from Gulf countries, where they have been going as the migrant workers. When we enquired it from many young persons, who were eager to converse in Hindi with us, they told us that more than 90 percent migrant workers in Qatar a country in other Gulf countries, speak in Hindi or Urdu and therefore, everybody has to learn Hindi/Urdu, out of compulsion, so as to communicate with other fellow workers.

Last time when I visited Sri Lanka in 1995 as a member of Press Council of India and I had found that there an atmosphere of fear of the indiscriminate bombings and terrorist attacks was lurking all-around even in the shops, offices and other public places in Colombo but now there is no such fear.

The natural beauty of Sri Lanka is seen to be believed. It is simply breath-taking. The vast expanse of the land from south-west Sri Lanka to northeast in Batticaloa, Trincomalee is largely virgin and unexplored. This is mainly due to nearly three decades long drawn civil war. The unfortunate war waged by the ‘Liberation of Tamil Tigers Eelam’ (LTTE) must have caused heavy causality of men and materials in Sri Lanka. Thousands must have been killed by the police, army, administration and the general public. According to an estimate, hundreds of Indian Jawans of the ‘Indian Peace Keeping Force’ (IPKF), sent by the government of India for restoring peace, were killed in Jaffna and Trincomalee. Those gallant Jawans were killed unsung and unwept. We spoke to an officer at Gunners’ Club in the Central Province of Dambulla on way to Batticaloa, who told us that no Army man wants to die without fighting a battle, that too, when he is working for the restoration of peace. It is true indeed because if an army man dies in the battlefield then his family members and the society and the country remembers him as a martyr but if he dies without fighting then it is the saddest thing for him. He was very happy to have arranged a sumptuous and delicious lunch for us. 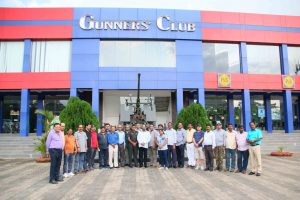 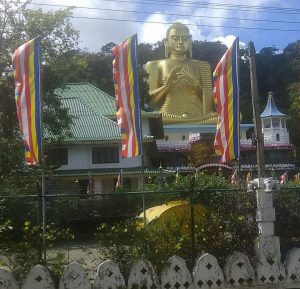