The life history of Vinayak Damodar Savarkar is so touching and heart-wrenching that it moves even a stone-hearted person. The way he escaped from the ship S.S. Morea which was bringing him from Britain to India at Marseilles port of France was a hair-raising story of unprecedented courage and adventure. If the silly and stupid authorities of the French harbour had not handed over Savarkar to the British Police, the history of India would have been altogether different. France was at loggerheads with England, so, ever body genuinely thought that Savarkar would be tried in France and not in India, a colony of Britain.  The feat of Savarkar was the talk of the town not only in India, Britain and France but it was flashed as big news in most of the newspapers of the world. The French government was roundly criticised for its inept handling of the Savarkar’s escape from the ship. He swam from the ship to reach the quay of the port and then ran towards French to be arrested by them but before he could be arrested some startled security handed him over to the crew and the guards of the liner.

It could have been performed only by a person, who was not only an intellectual giant but also the epitome of fearlessness, formidable inner strength and strong conviction. Thereafter, he was brought to India put in jail and after his trial, he was sentenced to two life imprisonments spanning 50 years. He was sent to Andaman to undergo ‘Saja-e-Kalapani’. He suffered extreme punishment of extracting oil from the oil mills, spinning ropes and pounding of coir. Within a few months of his jail term, he was reduced to skin and bones. The leader that he was, he started organising the convicts also to rise in revolt against the jail authorities for which he was mercilessly beaten by the Jail Jamadars in the Cellular Jail. The extremely bad conditions in which he and his elder brother Ganesh Damodar Savarkar lived in jail and were denied even those facilities which were available to other prisoners speak of the fact that they were considered dangerous by the regime.

The book ‘Savarkar echoes a forgotten past’, is a brilliant biography written by a young historian Dr Vikram Sampath. The book chronicles the life and activities of Savarkar, more known as ‘Veer Savarkar’ from 1883 to 1924. Cellular Jail as the name suggests had only cells and no barracks. Each cell measured 13’6” X 7’6” and there was a small ventilator at height of 9’8”. It was under Mr Barrie, who was considered to cruellest jailor at that time. What is a most surprising thing that even in Cellular Jail Muslim Jamadaras from Balochistan used to get sadistic pleasure in torturing Hindu prisoners and this was the reason that many Hindu prisoners in order to escape the torture were getting converted to Islam. The procedure of conversion was very simple. There were two kitchens; one was meant for Hindus and other was for Muslims. Any Hindu moving to Muslim kitchen to get relief from the cruelties was immediately considered to have converted to Islam. Vinayak Ganesh Savarkar considered it to be an insult to Hinduism and a cause for huge pain to him.

He was deeply influenced by the founder of the Arya Samaj Swami Dayanand Saraswati, who had also advocated for the reconversion of Muslims and Christians to Hinduism through Shuddhi movement. As a result of it, he started reconverting the Muslims to Hinduism, who were converted to Islam by force, fraud and cheating. This initiative of Savarkar further enraged Muslim Jamadars and they became more cruel towards him.

While reading the Sampath’s book one comes to know that his elder brother Ganesh Vinayak Savarkar was transported to life imprisonment in Cellular Jail much before younger Savarkar i.e. Veer Savarkar reached. The sufferings of elder brother were, in fact, more harrowing than even his younger brother. Anybody who reads the jail accounts of Savarkar brothers will be filled with contempt and anger towards Britishers. Both of them spent a rigorous and inhuman life in Kala Paani for one and half-decade. They were given practically uneatable food. Every trick of the trade was adopted to crush and break them mentally and physically.  Their sufferings were unimaginable, to say the least.

While in jail Vinayak Damodar Savarkar struggled to avail certain facilities to other prisoners like newspapers and some assorted books to read. They also got the concession of receiving letters from their family members once in six months, earlier it was not possible for any prisoner to get any letter from their family members. And the second thing was the facility of medicines for common deceases like cold, cough and fever etc.

Savarkar had no two opinions about the pride of place for Hindi in Independent India. He started work for the propagation of Hindi even when he from 1906. While in England he had begun work to make Hindi the national language of India. He championed the cause of Hindi to be written in Devnagri script. He always thought that Hindi was an important tool for national unity. It was supported by other national leaders like Baal Gangadhar Tilak and Gandhiji. He was dead superstitions, which was the bane of the poor, illiterate and gullible masses of India

Savarkar vigorously worked for the annihilation of the caste system as he considered it was the biggest weakness of the Hindus. He was chastised all those who believed in it. He used to say that strange and shocking were the ways of Hindus that they make some people untouchable but the moment they converted to Islam or Christianity; Hindus gave them all respect. Therefore, the Hindus must mend their ways and must work for the eradication of the caste system from Hinduism. Thus, Savarkar was not only freedom fighter par excellence but was also a great social reformer. The learning and understanding of Vinayak Damodar Savarkar can be known by reading his books like ‘The Indian War of Independence of 1857’, and ‘My Transportation to Life’.

Both brothers were discriminated against even fellow prisoners. While other prisoners were granted general remission after ten years, they were denied it. Savarkar brothers should have been released after 14 years but they were not allowed. They were political prisoners, but they were treated much worse than hardened criminals.  Their parents died when they were in jail. The baby son and wife of the elder brother died when both of them were in jail. The wife of the elder brother could not get the opportunity to see her husband even when she was on death bed. Veer Savarkar also lost his four-year-old daughter while in jail and he could not get the chance to see her at the time of her death. This personal pains and trauma of Savarkar brothers swell the eyes with the tears of anybody.

The much fuss and hullaballoo, which is created around Vinayak Damodar Savarkar about the letters of apology that he wrote to the government is simply a shameless effort to malign one of the greatest revolutionaries that India had produced. By reading those petitions which have been appended in the book one finds that Savarkar simply raised objections for making discriminatory and inhuman treatment to them. He also pointed out the violations of jail manuals with regard to the injuries that were inflicted on him and his brother. By reading those petitions one finds that Savarkar was never apologetic about his revolutionary activities. Except one of his letters written on 20 March 1920, after ten years of his incarceration, wherein he had asked for showing the magnanimity as ‘magnanimity wins even where might fails’. He never wanted any extra consideration for himself and his brother. He always pointed out in his petitions that they were entitled to remission after spending so much time in the jail. This gripping biography of Savarkar describes the revolutionary zeal of both brothers for the emancipation of India.

For Savarkar India was a pious land and fatherland for those who were born in India and this was the definition for Hindutva for him. He was the opponent of the compromising and conciliatory politics of Mahatma Gandhi but so were Bhagat Singh and many other revolutionaries like them. He considered that the Khilafat Movement was thoroughly communal and retrogressive, which started by those wanted to establish the Islamic Ummah. Mahatma Gandhi fell into their trap for the sake of Hindu Muslim in his struggle for the freedom of the country but these Khalifatists ultimately turned hostile towards Hindus. Thus, Gandhi ji failed to win the support of Muslims.

Savarkar supported for the reformation in Islam, and he believed, that was what undertaken by Kamal Ataturk Pasha in Turkey. So, Gandhi should have extended his support then ruler of Turkey, who had overthrown ‘Khalifa Raj’. By reading this book one comes to know about other revolutionaries like Barin Ghosh, Lal Hardayal, Shyamji Krishna Verma, Madan Lal Dhingra and Madam Cama ji. Savarkar believed in the larger unity among Hindus. He was an ardent admirer of Guru Gobind Singh.  Credit goes to him for popularising the slogan of Vande Mataram. The book is written in a gripping style in elegant English and should be read by everybody to know the sacrifices which were made by Veer Savarkar for the pious land that India is. 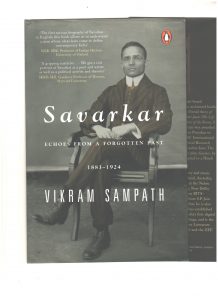