Absorbing and Compelling Biography of Savarkar 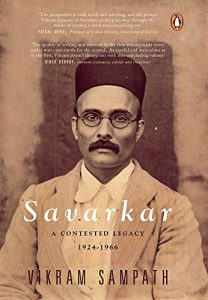 There are some path-breaking books which open the eyes of the readers. The two-volume biography of Vinayak Damodar Savarkar by Vikram Sampath is certainly one of them. The first volume titled as ‘Savarkar: Echoes from a Forgotten Past’ covered his life from 1883 to 2023. It was published in 2019 and talks about his daring escape and capture from the ship S. S. Morea at Marseilles (France) and the long and harrowing incarceration in the Cellular Jail of Andaman, more known as Kaala Paani. The second part is the sequel of the first one, which is named as ’Savarkar: A Contested Legacy’ and covers his life from 1923 till his death in 1966. It deals about his activities of social reforms, political activities from the platform of Hindu Mahasabha, elucidation of the concept of the Hindutva, opposition to the idea of Gandhi’s non-violence and the two-nation theory of MA Jinnah. The book provides the vivid description of the red fort trial of Mahatma Gandhi’s assassination case.
Savarkar worked vigorously for the eradication of the caste system, particularly the abolition of untouchability, from the Hindu society. He advocated for the reconversion of Muslims and Christians to Hinduism, who had abandoned their religion because of force, fraud, and other inducements. He was deeply pained to see the farcical Hindu Muslim unity that was being trumpeted by Mahatma Gandhi by supporting the Khilafat movement. Instead, he told Muslim brethren that ‘you are Hindu by blood and race, and you are dearer to us than the Muslims of the world, but if you feel that you are dearer to the Islamic countries like Turkey than the ‘Hindu Kafirs’, then do understand that this delusion will end in your downfall.’ For him, in fact, ‘Hindu-Muslim unity was a mirage and ‘Hindutva’ is the only nationalist creed.’
Savarkar had talked about seven shackles of Hindu society. They were (1) denial of Vedic literature to one and all Hindus; (2) choice of profession by merit not heredity; (3) untouchability; (4) barring crossing the seas fearing loss of caste;(5) denial of reconversions to Hinduism; (6) restrictions on inter-caste dining; and (7) inter-caste marriages. Thankfully, most of these shackles have either now got broken or diluted with the passage of time but the curse of casteism and non-entry of other religions to Hinduism is not only continuing but has become more entrenched. He sharply disagreed with Mahatma Gandhi, who was of the view that Islam was the religion of peace. Savarkar was candid and direct in asking him: what makes you think so patently wrong? He was of the view that Buddhism, Christianity and Hinduism, of course, teach peace but not Islam.
Savarkar was always ready to work with the Shuddhi movement of Arya Samaj and with its help in October 1926 he converted one Professor Pinto of Lucknow to Hindu fold. Professor Pinto was M A from Cambridge and was attracted to Hinduism after having studied comparative religion. There is an interesting incident that happened in January 1928, Tukoji Holkar, Maharaja of Indore, wanted to marry an American girl, Miss Miller but it was being opposed by orthodox Hindus. He was even ready to convert to Islam to marry the girl he was madly in love with. Savarkar supported him to marry with his ladylove without converting to Islam. He got support from the Arya Samaj and even from the Shankaracharya. Maharaja was so happy with Savarkar and Shankaracharya that he gave a generous grant of Rs Two lakhs for undertaking Shuddhi work.
The amount of work that has been done by the author in writing the biography is really mind boggling. One is amazed by the industry, inclination and commitment to the cause of presenting the authentic life history of Savarkar. There is no trace of hagiography, which is usually found in the biographies. The readers have been left to arrive at their own conclusions on the basis of the copious facts. Savarkar analysed the problems of Muslims that ‘their theology and politics divide human world into two groups only- The Muslim land and the enemy land. All lands which are either entirely inhabited by the Muslims or ruled over by Muslims are Muslim lands. All lands, which are mostly inhabited by non-Muslim power are enemy lands and no faithful Muslim is allowed to bear any loyalty to them and is called upon to do everything in his power by policy or force or fraud to convert the non-Muslim there to Muslim faith, to bring about its political conquest by Muslim power. Consequently, a traditional patriotism is a word unknown to the Muslim-nay is, tabooed, unless in connection with a Muslim territory……………They could not be accused from their point of view of being traitors to Hindustan. Their conscience was clear. They never looked upon our today’s Hindustan as their country. It is to them already an alien land, and enemy land- ‘a Dar ul Harb’ and not a Dar-ul- Islam’.

Savarkar shared the views of Dr.BR Ambedkar, who while quoting Theodore Morrison speech delivered in Paris in 1899, had said, ‘The views held by the Mohammedans are alone sufficient to prevent the establishment of an independent Indian Government. Were the Afghan, to descend from the North upon an autonomous India, the Mohamedans, instead of uniting with Sikhs and the Hindus to repel him, would be drawn by all the ties of Kinship and religion to join his flag.’ Dr Ambedkar further said that ‘Hinduism is said to divide people and is in contrast Islam is said to bind people together. This is only a half truth. For Islam divides as inexorably as it binds. Islam is close corporation and the distinction that it makes between, and non-Muslims is very real, very positive and very alienating distinction. The brotherhood of Islam is not the universal brotherhood of man. It is the brotherhood of Muslims for Muslims only. To the Muslims ‘ibi bene ibi patria (where there is bread , there is my country) is unthinkable. Where there is rule of Islam, there is his own country. In other words, Islam can never allow a true Muslim to adopt India as his motherland and regard a Hindu as his kith and kin. That is probably the reason that why Maulana Mohammed Ali, a great Indian but true Muslim, preferred to be buried in Jerusalem rather than in India.’

Savarkar’s life was full of miseries from his young days to the last breath of his life. It is difficult to fathom the pains that he endured in his lifetime but never deviated from his chosen path. The famous Amrit Bazar Patrika wrote about
him saying ‘whether one agrees with all his views or not, Mr Savarkar compels attention by his boldness and clarity of his utterances. He knows no doubt or hesitation. His logic is merciless, his humour caustic, and his irony effective. He is a man with a mission.’
Savarkar had never made any bones of his disliking for the policies, principles, and programmes of Mahatma Gandhi. Non-violence for him was not only sinful but immoral as well. He used to say that the doctrine of no-violence numbed the revolutionary fervour, softened the limbs and hearts of Hindus, and stiffened the bones of enemies. The lambs resolved to lead vegetarian life, but wolves were not connected with their pious resolution. It may sound strange, but it is a fact that Savarkar was an ardent supporter of the Cow protection but was against Cow worship. This was the reason that his name was even being linked with the murder of Mahatma Gandhi although he was exonerated of all charges in the Red Fort trial. Nonetheless, his adversaries always try to paint him as the guilty man of Mahatma Gandhi’s murder. He himself had claimed that he was neither a fanatic Hindu nor a communalist but ‘I cannot make donkeys think like horses.’ He was a staunch supporter of Hindi in Devangari script for making it the national language.
In the twilight of his life, he was almost immovable and had abandoned taking anything before proceeding for his last journey. He remained engulfed with controversies during his lifetime as well as after his death. Glowing tributes were paid to him after his death by the political leaders of all hues.
The book is a commendable effort to make the objective assessment of Veer Savarkar and deserves to be read by all those interested in the history of freedom struggle. It is written in racy style and good English and keeps the readers absorbed from beginning to the end.